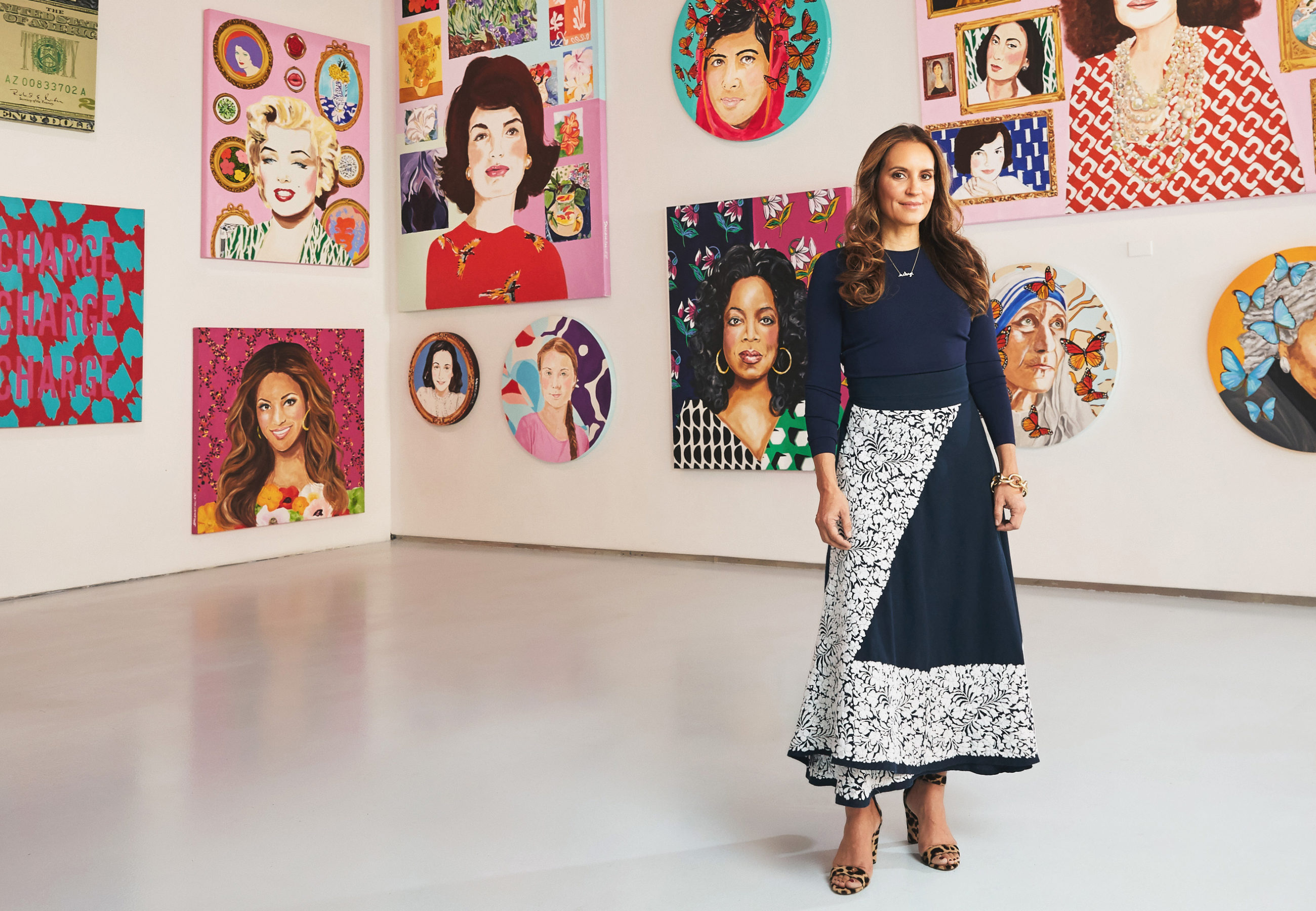 Being the CEO of any company is a huge responsibility, but filling the role of CEO of a brand as iconic as DVF is what we would deem major. Sandra Campos, our March Mujer, is just the woman to fill such a role. A fashion veteran who has had a distinguished career in retail, having worked at global labels such as Ralph Lauren, as well as launching her own venture, Sandra has seen many different parts of the business. She’s spent time buying, merchandising/planning, and leading. Her illustrious career has been punctuated with inspiring lessons; and we had the opportunity to speak with her this month about how it’s all culminated to this point.

You’ve had such an inspiring career, with stints at both large fashion labels like Ralph Lauren and Global Brands Group, as well as working as a cofounder for a consumer products company.  Tell us a little bit about your career path. Has it taken the path you expected? What has been the biggest surprise?

That’s [a big question].  I’ve been around a long time.

Now, after all of this experience, I sometimes wonder, “Why didn’t I try other things?” which is what I tell my kids, but you never really understand what you’re doing and what you’re gaining from what you do until after the fact.  For me, it was no different. I grew up in a generation where you just worked your way up the ladder (as opposed to starting at the top as this generation often does). In fashion, you obviously have to grow and change, and I gained experience essentially from different companies and adding on responsibilities. The more I added, the more I understood about the [overall] business and the more I was able to lead.

And I was able to be an entrepreneur when I was going through a divorce and had 3 kids under the age of 4, and I needed to create a life that I was able to have with my kids as well.  But in doing that, (I’ve been an entrepreneur twice now), I have been finance, I have been customer service, I’ve been PR (dropping off things at media companies), I had to do it all; but what I gained from that was incredible.  Warehouse, logistics, operations, I had to learn on the job. You don’t have such an active hands-on experience unless you’re doing it, and I’ve had that experience on both sides. So now, at this point, everything I’ve done has culminated in this moment of my career, not only from a brand and brand management perspective but also leading the business on a global scale.  But all of my experience has been different and led to these experiences. At my last company, I was overseeing six brands, but they were global, so I had huge international exposure, and understanding consumers on a different scale. That certainly added another layer of confidence and knowledge.

What was one of the biggest challenges you face in your career?  What do you wish you had known at the time?

I don’t ever look at things with regret, and I never say If I had known X, this wouldn’t have happened, but certainly, there were situations when I have faced challenges.  When I was working with Selena [Gomez] with joint venture partners, we had to go out to get investors. And we had so many Nos. People just didn’t have the belief or the vision – it took so many conversations and trial and error to find someone to invest with us.

The other thing is that when you leave corporate and start your own business, it’s not easy to get back in [to the corporate world]. The thing you have to have is people who believe in you.  I was lucky in that I had a few recruiters who believed in me, and they wanted me to get back into the best position possible. You have to have the right visionary to help push that along. I see that with a lot of women who leave the work force and try to get back into it.  It’s about having other women who go along the journey with you.

A wise mentor of mine once said, you can only do 2-3 things well, so really focus on what those things are.  When you joined DVF, what were your main goals? Have they changed today?

It’s hard for somebody who tries to be very innovative, who is focused on new ideas all the time to streamline down to three goals.  But it’s for sure what needs to happen.

So when I arrived, the first goal was to stabilize the business:  to create international infrastructure, solidify channels of distribution, and to be able to stabilize from a financial standpoint.

Second goal was to get back on brand and to bring the purpose that Diane has in her life and to bring that into the brand, all the way from the product to the consumer and how it’s being messaged.

The third thing was to create a culture and an [external] community that understood and rode that journey of getting back on brand through elevating Diane, once again (and all that she does internally and externally).  We want to build a company that supports women through the platform [that we have]. It’s not about me being in charge of other people. It’s about being in charge of yourself and owning decisions and your own future. I don’t have regrets because I know I’ve made conscious choices; I’ve made them and have lived with them.  So I’m going to make the best of those situations. That’s what this whole experience is about - sharing that [message] across communities. And supporting female-led brands at the same time.

You’re such an advocate for women, and I feel this is a big part of the DVF brand as well.  How do you champion women at work?

Repeat, repeat, repeat.  That’s really what it is.  Repeating it everyday. Companies often get fatigued from hearing themselves speak, but at the end of the day, the external community can’t hear it enough.  Look at Geico or the Energizer Bunny, you know what those brand associations are. That’s something we have to do.

How would you describe the DVF woman in one sentence? 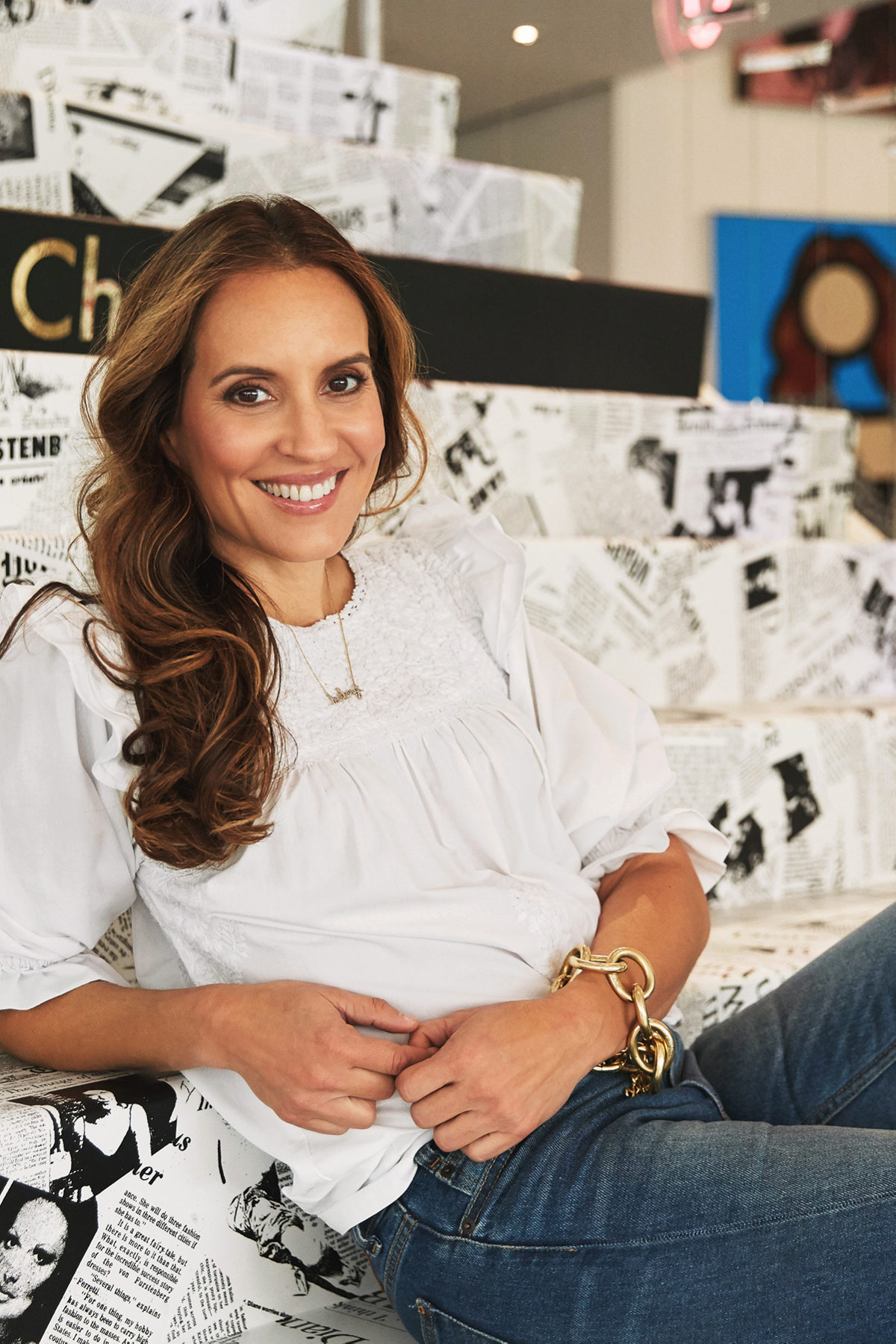 How do you balance staying true to the DVF core customer but also evolving style-wise and appealing to the new generation of DVF customers?

To me, the main message is you can’t focus on demographics, whether it’s a 20- year old or a 50-year old.  It’s about a psychographic. We try not to focus on being the flavor of the month, the one that everyone’s talking about, the shiny little object, because as a brand, it’s not about short-term, it’s about the long-term.  It’s the marathon, not the sprint, so the decisions you make today will impact your brand three years from now.

Those are things I emphasize for the team as well, it’s about longevity and what you mean to the community.  It’s not about creating things for the sake of marketing. It has to be truly authentic.

When you were in your 20s, what did you think you’d be doing now?

I’m doing exactly what I wanted to do.  I like building things and leading people, and that’s what this opportunity allows me to do.  And I’m able to do it with someone who’s super iconic and amazing and helps push me as well.

How did you balance being a working mom with three kids?  Is balance a myth?

I wish I [had balance], but no. You do the best you can in every phase of parenting.   Now, I have a 20, 17, and a 16 year-old. They’re in different phases of life. And I was a single mother, so I had help during the week, and thankfully, I was fortunate to have an amazing person with them when I was working.

Look, I don’t personally believe there is balance in terms of how people define it.  Balance comes on a day-to-day basis, you may have it one day and not another day. And you find it in different phases.  I did walk away from the fast-track corporate life [at one point] to [pursue] an entrepreneurial path so that I could spend more time with my kids at that time.

What is your favorite part of your job?

I love learning.  So I honestly love having meetings with people from the outside.  I generally try to take as many meetings as I can to experience new startups or new vendors that could be helpful to our business. I really really love learning.  Those are the moments that I’m really engaged and excited for the future. I love seeing what people are doing and the excitement that surrounds those businesses….I love meeting with entrepreneurs because I am one at heart.

Describe your typical morning routine and your day.

I am always up by 5:30 am and I generally do exercise around 6.  I don’t drink coffee. I love green juices and smoothies, so I have a consistent routine, I’m a creature of habit.  I have a daily morning smoothie. It’s funny, most people in the office say they haven’t seen me eat food because I am constantly drinking smoothies.  And dessert too. I love dessert!

For weekends now, I go to upstate New York. It’s not fully relaxing yet because I’m renovating, but I love it.  You can see nature. It’s taken me a long time to feel like I needed that but I appreciate it.

I like building things and leading people, and that’s what this opportunity allows me to do. And I’m able to do it with someone who’s super iconic and amazing and helps push me as well.

How do you spend your ideal Friday night?

Well, now that I go away for weekends, driving out to the country and going to eat at our little local country café. For most of my adult life, by the time the weekends, I’m so tired, that Friday is usually a movie and sleep.  That’s what I enjoy – I love movies. I love to be able to decompress after a long week.

Last meal on earth, what do you eat?

How do you spend the holidays?

I always spend it with my family.  I’m one of six, so we get together every holiday season with the grandkids and my mother, and my family is everywhere.  So we either spend in New York, Boston, or San Diego.

What beauty product could you not live without?

Any specific trends you’re predicting for 2020?

I love the interest in sleeves.  Anything having to do with sleeves.  Love love love it for the season, and another trend is wellness.  There is this amazing new place I want to join that is a wellness club, and I think that’s a big thing I’ll be focused on in 2020.