A true artist can find beauty (and humor) in the mundane. A skill that’s hard to come by and even harder to harness regularly, Mindy Kaling is no stranger to creating comedy from the foibles of humankind. Her breakout moment came as a writer and actress on The Office, but she’s gone on to write books, produce and star in her own romantic comedy, and become a mother! As a writer, actress, and producer, Mindy is the ultimate triple threat, juggling life with a dose of style and a heaping spoonful of sensibility. We were so honored to get the opportunity to hear about her story and how she broke into an industry that is particularly hard on women. Her story is one of persistence, inspiration, and a lot of creative passion.

Growing up in Cambridge, did you always daydream about doing what you do today?

I was always obsessed with TV and film but had no access to it. I went to high school in the 90’s, which was pre-Twitter, pre-instagram, basically pre-internet, so Hollywood felt especially far away. But I would stay up late and watch Saturday Night Live and watch the names of the writers scroll by and wish I knew the path of how to get there.

Were your parents always very encouraging of your career path and how has your childhood/adolescence impacted your writing (particularly for Never Have I Ever)?

Even though it was very new to them, my parents were always encouraging of my artistic ambitions. My mom was a doctor and my dad is an architect, but they loved watching funny shows with me growing up, so they understood the emotional pull of Seinfeld or Friends. I’m not typical of some of my Indian friends with parents who are more traditional, because my parents never steered me in the direction of being a doctor to computer scientist (though I’m sure they would’ve loved it!).

As you were getting started in your career when you first moved to Brooklyn, what were some of the most challenging periods? How did you find the courage to keep persisting in an industry that can be notoriously tough, particularly for women (and women of color).

I remember feeling so helpless and depressed in Brooklyn as a 21-year-old, coupled with the highs/excitement of living in the city for the first time with my friends – a real rollercoaster! It was frustrating because I was babysitting and doing odd jobs to make my rent, and I was physically so close to 30 Rock and all those glamorous places – but I was a million miles away with no access. During those times I had to rely on myself as a writer to keep sane and feel productive. No one was going to hire me to write and star in anything, so I wrote a play with my roommate, which became an off-Broadway hit, Matt & Ben.

What advice would you give to your 19-year-old self today?

I was such a headstrong know-it-all as a 19-year-old that there’s no way I would’ve listened to any advice I’d give. But I think I would’ve tried to assuage my younger self’s fears a bit about the pervasive whiteness of the comedy world, and that the environment would change.

Now, as a mother, has your perspective on your own youth or upbringing changed at all? If so, in what ways?

I wish I had been able to see things from my parent’s point of view. That’s so hard when you’re a teenager. When I was moving to New York “to make it”, I had no idea how scary that probably was for my parents. I didn’t realize at the time just how outside of their comfort zone my choices were for them, and I really have to give them credit for being as open-minded as they were. 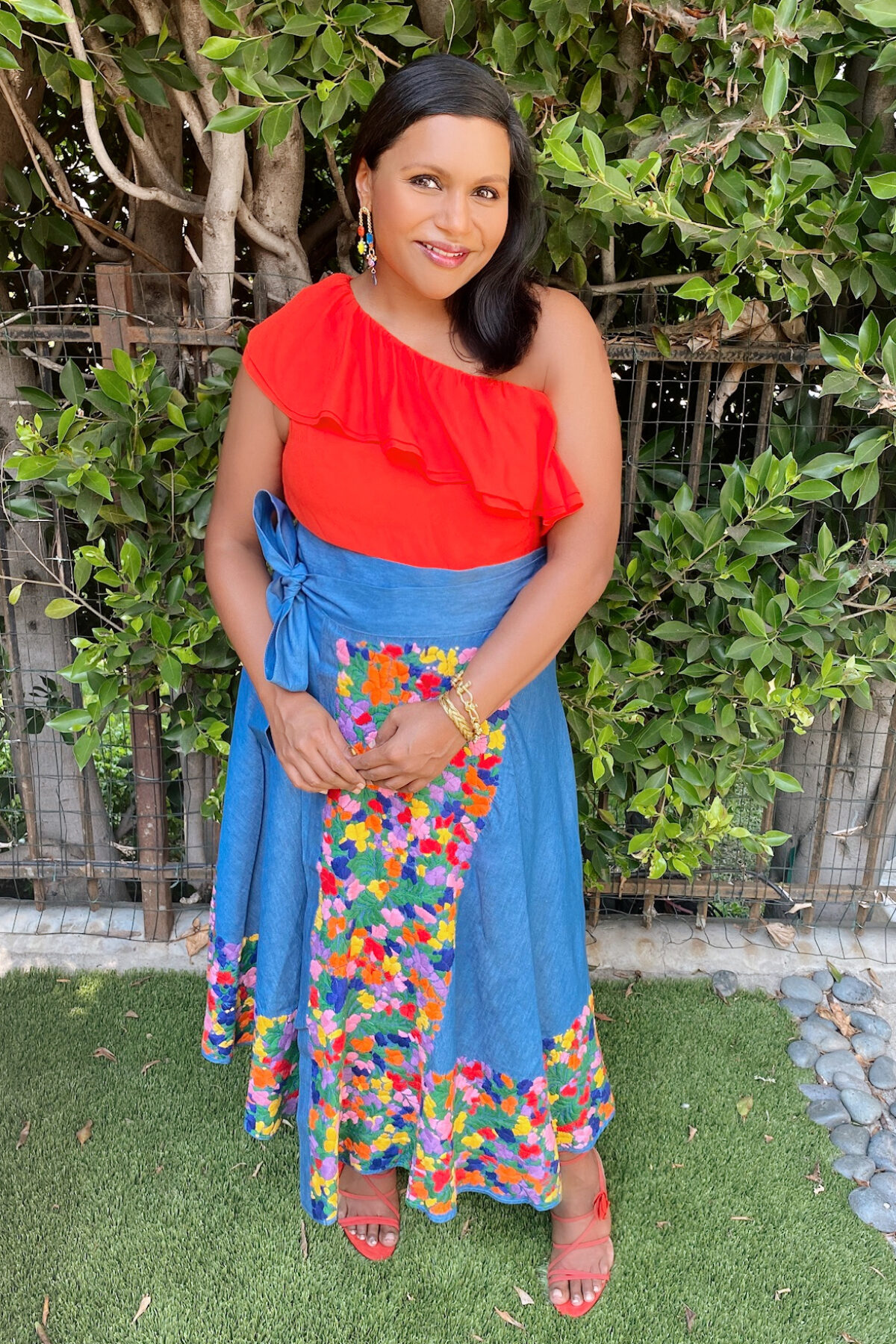 I’ve been lucky, but let’s be honest, 90% of my career is based on hard work, and even more than that, it’s working on several things at once, so if something falls through, I have other options. ​

With The Mindy Project, you were the first woman of color to create and write and star in a major sitcom. What sorts of goals do you have given your platform and the breadth of it?

Right now, I’m mostly excited about staffing my shows and casting them with people you don’t always see in those roles. I think the greatest joy of The Mindy Project - besides playing that extremely fun character and meeting so many of my lifelong friends from the show - is gaining the kind of credibility in Hollywood where now I can produce shows with other minority leads and people think “Okay, cool, she will be able to keep that on the air and we aren’t worried.”

Who are some of your favorite characters from TV shows (past and present)? What draws you to them?

I love so much different kinds of TV. Right now, I’m loving Barry from Barry. Bill Hader is the funniest person alive. I also love Micaela Coel in both of the shows she created, I May Destroy You and her comedy Chewing Gum which came before it.

In a Times article from last year, you reference that comedy isn’t a meritocracy, that a lot is based on serendipity. What sorts of serendipitous events in your life have gotten you to where you are now? And how has that influenced how you view younger writers and comedic actors rising through the ranks?

I think being hired to write on The Office was enormously lucky, because the aesthetic of the show was “What is real is beautiful.” Rather than 99% of other shows in 2004 where the showrunners want all actresses to be thin and white. When Greg Daniels, the showrunner, got to know me and wanted me to be on the show, it was only because he wanted real, authentic people to be featured, and not every actor gets to be in that environment. I’ve been lucky, but let’s be honest, 90% of my career is based on hard work, and even more than that, it’s working on several things at once, so if something falls through, I have other options.

Describe the cadence of a typical day (in a pre and post-COVID world).

Pre-Covid: Wake up between 6-6:30, send emails/do work, play with my daughter and make her breakfast, go to a spin class (remember that?), leave my home for the studio (can’t imagine getting in a car going to work) start the writers room at 10, and be home around 6:30-7 to read bedtime stories to my daughter before watching an hour or so of a great murder-based show.

Post-Covid: Wake up around the same time, for whatever reason have less time to work out and so skip that?, Zoom with the writers for a shorter, more intensely focused workday (which is somehow way more exhausting?) then play with my kid. Try to ignore my sprouts of white hair on my head (I basically have Steve Martin’s hair now), and my thick Eugene Levy eyebrows. I guess what I’m trying to say is my entire appearance has transformed into a 90’s white male comedy figure.

How do you generally spend a typical Friday evening?

Fridays are for home with friends and family. I’m not Jewish but the concept of shabbat has always made sense to me. I’ve never had the energy at the end of the work week to go out on Friday night. That’s what Saturdays are for. And pre-Covid, I used to love the ritual of getting ready to go out (hair, makeup, styling myself in a cute outfit). The ritual itself was often more enjoyable than the evening. I’ve loved fashion since I was young, so putting together an outfit from my closet is something I really look forward to when I have time.

You’re stuck on a desert island; what three things do you take with you?

House of Mirth by Edith Wharton, a bag of Australian red licorice from Edelweiss Confections in Los Angeles, Paul Simon’s Graceland album. (Incidentally, is someone taking care of my daughter? I would obviously take her, but this is in a world where she is grown up and doesn’t want to come to a desert island with me).

Last meal on earth: what do you eat?

As Quentin Tarantino once said, “there are so such things as guilty pleasures, only pleasures.” That really resonated with me because I’ve always felt that “guilty” pleasures in pop culture tend to skew “female” (reality shows starring women, romantic comedies starring women, books featuring women or written by women) and felt slightly sexist to me. So now all pleasures are equal to me.

How do you like to style your Mi Golondrina pieces?

I’ve done it so many ways! The blouses are such statement pieces they look great paired with simple jeans and a great sandal, so I’ve done that. But I love pattern and color so much that I’ve also experimented with tucking a blouse into a statement skirt for a more “maximalist” look and it’s fabulous.