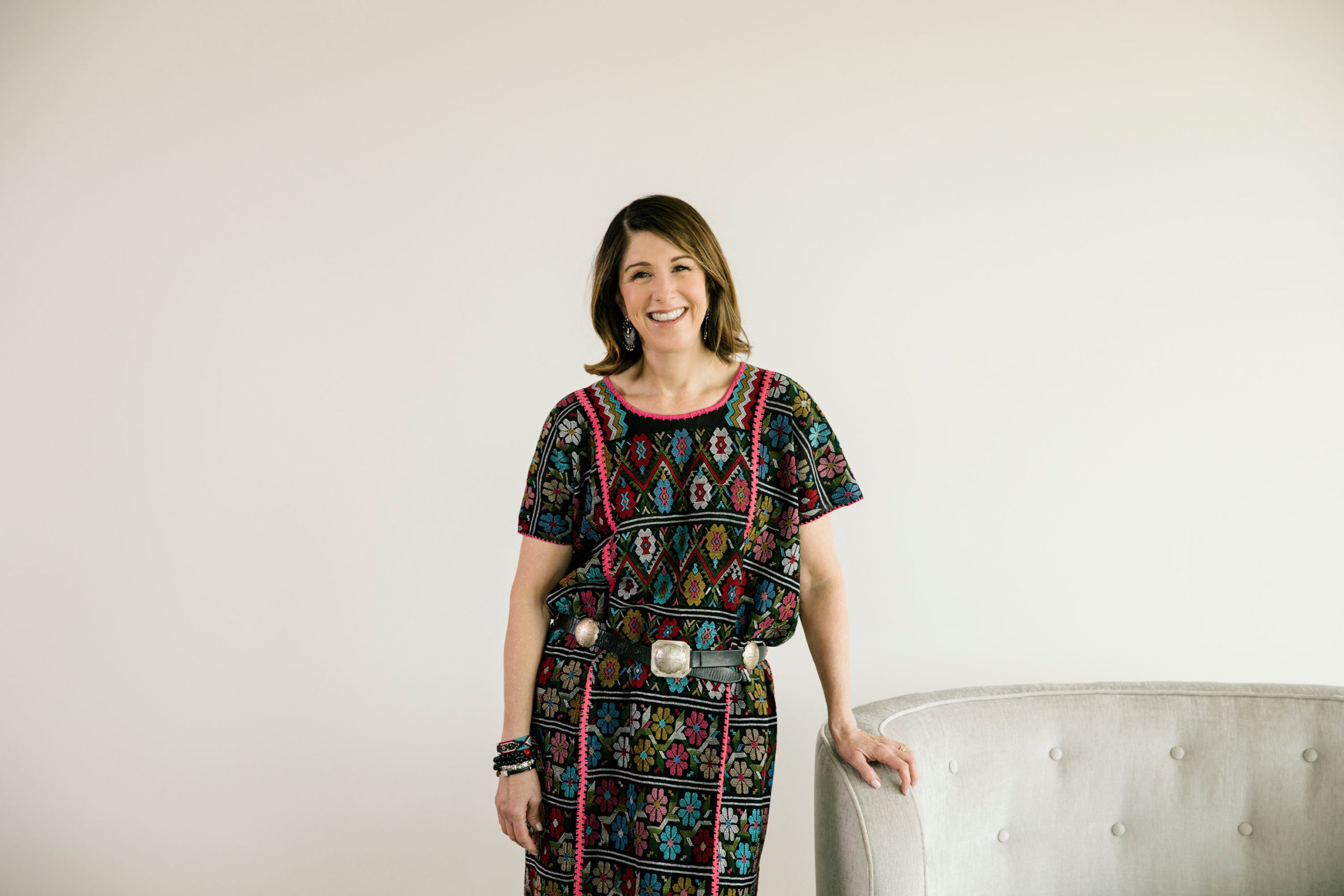 Today, we’re stepping into the world of Karen Katz, Neiman Marcus’s former President and CEO. Katz left her position in January of 2018 after working with the company for over 30 years.  Katz was committed to NM for those three decades, working her way to the top after starting as an assistant store manager. Katz’s own mantra of “good luck follows people who work hard” is never better illustrated than through her own career trajectory.

You have had such an inspiring career — what have been some milestones for you, either personally or professionally?

Becoming the first woman CEO of Neiman Marcus, other than the founder Carrie Marcus Neiman. It was a milestone I truly could never have dreamed of achieving. I still pinch myself that I had such an incredible opportunity.

You’ve mentioned in past interviews that you thought you once wanted to be a lawyer, but the Socratic method changed your ideas on that.  Yet, you’re a tenacious negotiator. Do you think perhaps that muscle was always pretty strong, you just hadn’t flexed it? How did you become better at it?  (Any tips and tricks?!)

I thought in high school maybe I could use my skills [of] talking to be a lawyer.  I became focused on that in college, but as you said, the Socratic method did me in.  Yet, those same skills became the needed weapon to become a great negotiator. Key tips for negotiation:  Know what you want, know where you are willing to compromise, and know what the other side needs. Then stay focused.

What was a particularly tough 2-3 year period career-wise, and what advice would you give yourself looking in the rearview mirror today?  What did those experiences teach you?

[The toughest years were] when I was vying to become an SVP for the company.  At that point, I had accomplished more than I had ever imagined for myself, and yet I thought I could do more. I interviewed for a number of SVP roles over a two year period and was turned down for them all. It wasn’t until Burt Tansky became CEO that he recognized I could be more, and he finally moved me into an SVP role.  But I will say it was tough getting turned down for those promotions. I lost confidence in myself and certainly questioned whether I should stick with it. My son was still a toddler then, and I questioned all the time whether I should hang it up and stay at home as a full-time mom.  But, ultimately, things worked out.

On the flipside, what were some of the best years at Neiman Marcus (what role were you in, why were those years memorable)?

I loved almost all of my positions, but I think the position that probably had the biggest impact was taking over the NM Direct business as president.  We had just launched neimanmarcus.com. The internet was the wild wild west. Amazon and eBay had just launched a few years before nm.com, and it was uncharted territory.  It was fun: a huge learning curve and beyond interesting.

Neiman Marcus made a number of acquisitions under your leadership.  How did you view potential acquisitions and what qualities were non-negotiable for you when looking at companies that would come under the NM umbrella (aside from the obvious financial metrics that had to be met).

MyTheresa.com was acquired while I was CEO, and we are very proud of that acquisition and what it ultimately did for the value of the Neiman Marcus Group. We were looking to expand internationally. We took a risk and started neimanmarcus.com.cn in China. We were just way too early for luxury e-commerce in China when we launched; and MyTheresa came along, and we became convinced it was a great way to expand internationally. 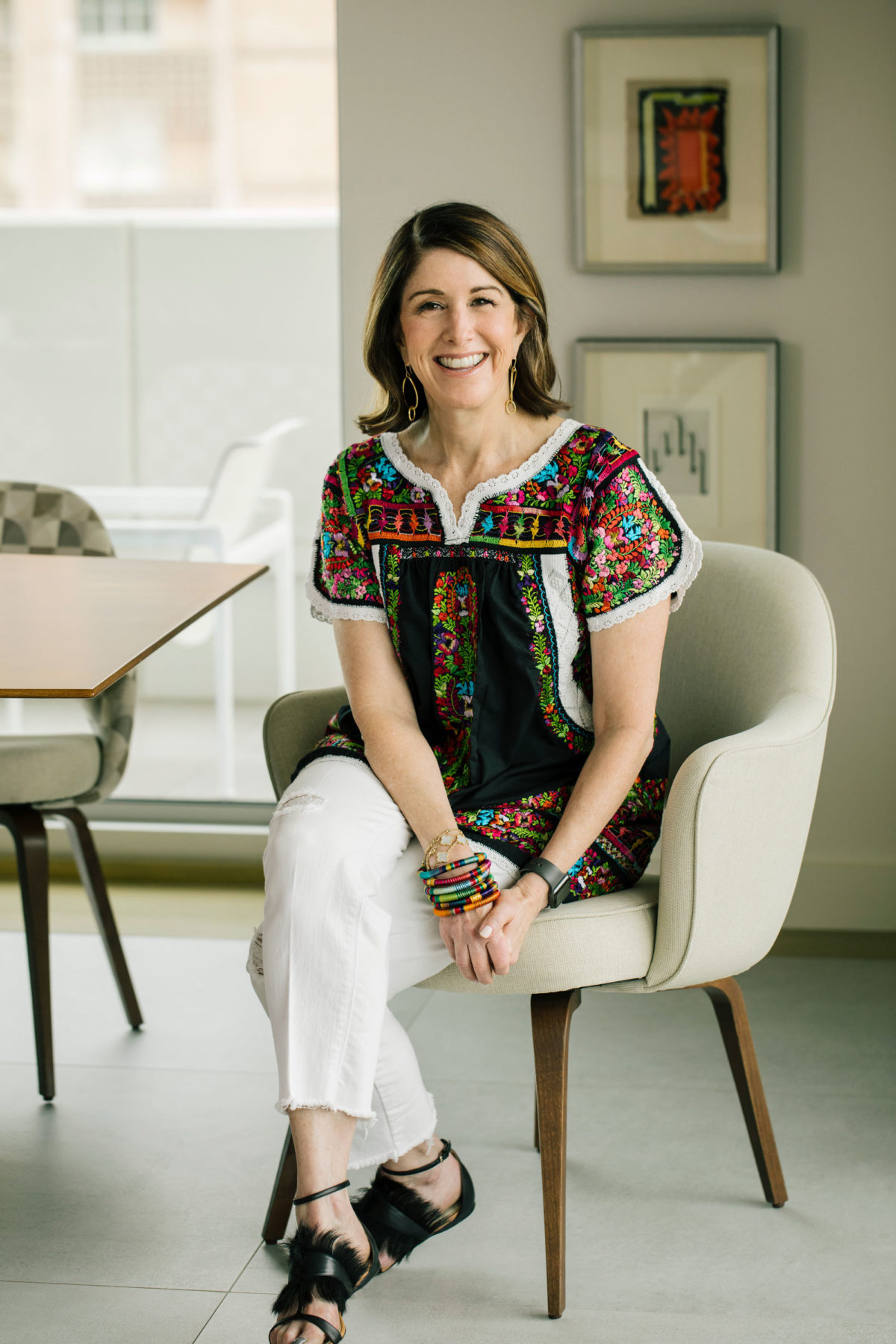 It was a milestone I truly could never have dreamed of achieving. I still pinch myself that I had such an incredible opportunity.

You brought so much of the Neiman Marcus experience online; and today, a significant percentage of the business is comprised of online sales.  How did you coach the designers and the consumers to get on board? Was there a network effect?

[As mentioned], it was the wild wild west.  Few European designers were willing to join us.  But finally one took a risk with e-commerce and that started to get the ball rolling.  European design houses have a pack mentality and once we got one or two on board, many, many others joined us.

What would you say are the major differences between the person that buys the Oscar de la Renta dress online versus in-store?  Is that consumer different? Do they need to be spoken to in different ways?

Today, there are few differences between online and in-store shoppers.  In-store shoppers may want that high level of service they can experience in a store, and, for years, was not available online.  Today, you can now get the great service through an online personal stylist at NM that somewhat replicates the in-store experience.

Luxury has changed, even in the last few years (for example, luxury handbags aren’t growing as a segment as they once did).  Do you think consumers are wanting something different from their luxury experience? What are the factors at play that contribute to the changing landscape?

I think luxury, however you define it, has become ubiquitous.  You can buy a Gucci bag from NM, the Gucci store, Farfetch, or from the RealReal.  It is all up to the shopper where and when she wants to buy that bag. I think this is the new world we live in.  Do you want a brand new dress? Do you want a “vintage” dress? Or do you want to rent a dress? [There are] many, many more decisions to make than just five years ago.

Looking into your crystal ball, how do you think shopping will be different a decade from now (particularly for high-end retailers)?  Any insights/predictions?

I wouldn’t even begin to predict what retailing will look like in five years.  The one thing for sure is there will [still] be a place for beautiful stores and online, both transactional websites as well as social shopping will be important components to the shopping experience.

When hiring, what 3 qualities did you look for when people want to join your team? 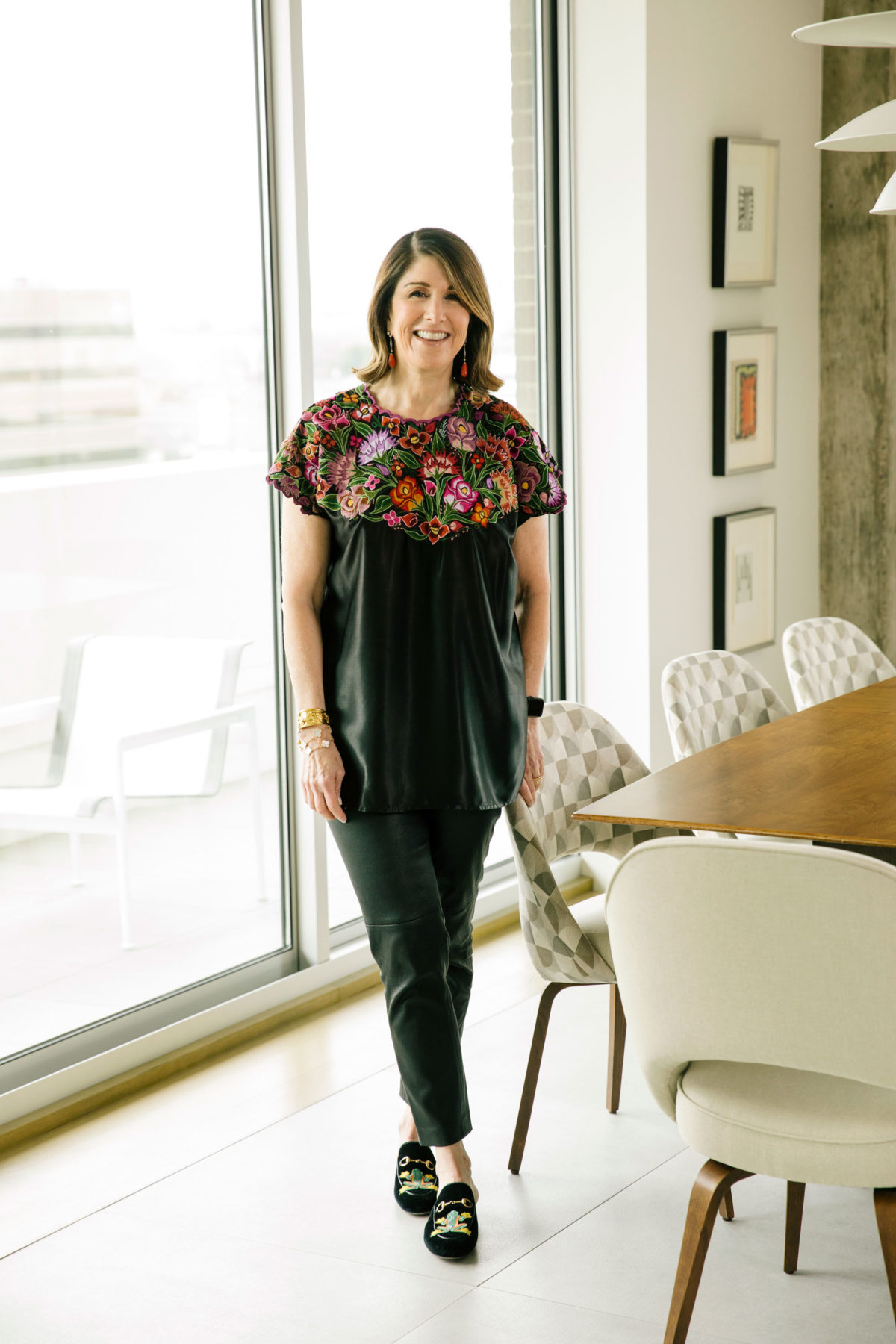 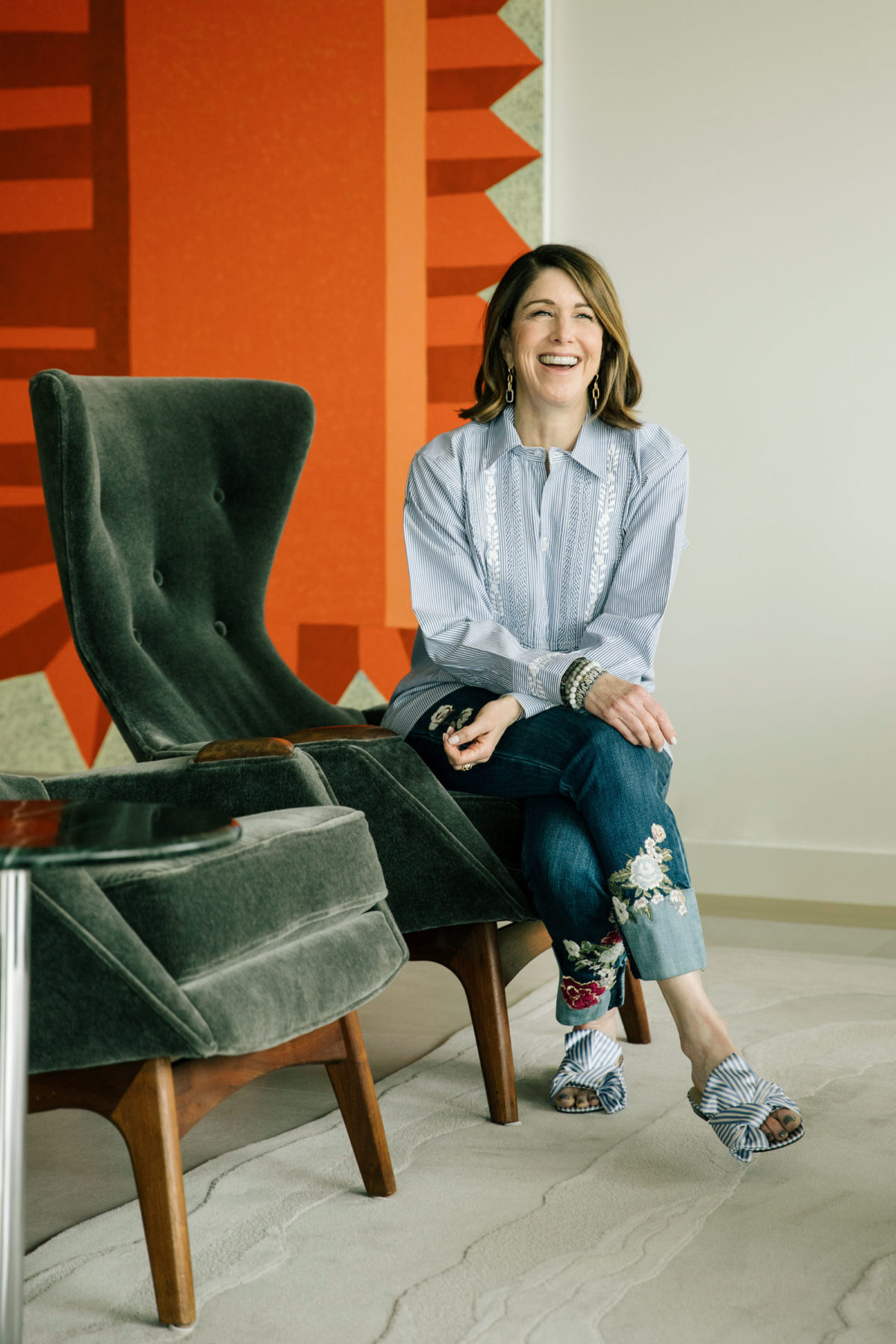 What was the last great book you read?

For non-fiction, Bad Blood and for fiction, Where the Crawdads Sing.

How did you balance having a family and running a huge global company?  Is balance a myth?

Working mothers (and fathers) have to accept that when juggling so many balls in the air, inevitably, some balls are going to fall.  You have to learn to accept it and move on. Learn to accept that the small things in the scheme of things don’t matter.

If you hadn’t worked at Neiman’s for 30+ years, where do you think you’d have spent those years?

Great question.  I have never been asked that before.  The answer to that question is I have no idea!

Switching gears, how would you describe your personal style and how has it evolved over the years?  Who are some of your most inspirational style icons?

I think my personal style did evolve as I gained confidence in myself as well as my roles as CEO, board member, mother, wife, daughter, and friend.  I think I have always had eclectic taste, and I love to mix things up. I have always had several designers that I covet at any given time and was an early adopter of high/low.  Today, as the world is so much more casual, this is still the way I dress. One thing I will not compromise on: I always carry a luxury handbag.

What’s next for you?

Advising entrepreneurs on their business strategies, giving more time to my community work, specifically the Perot Museum of Nature and Science, and having no stress in my life!