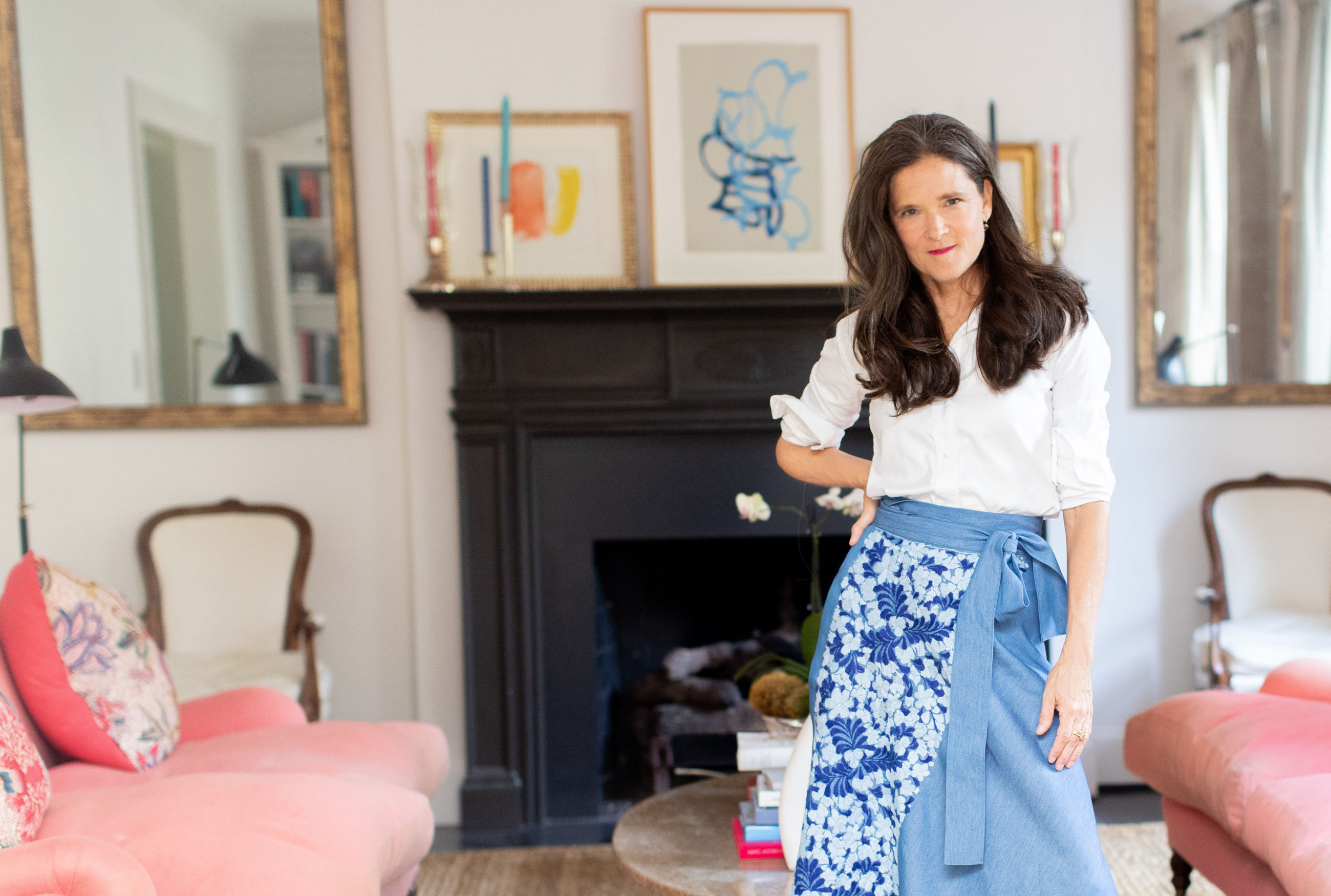 Ann Mashburn, known for the line that shares her namesake with her husband, Sid, is an inspirational force.  Having worked up through the ranks early on at Vogue and subsequently working at J. Crew while raising five (!) daughters, Ann dishes out sage advice about how she got to this point in her career and what it takes to be successful.

You started your career working in fashion editorial at Vogue for the famed Polly Mellen.  Talk a little bit about how that experience shaped who you are. What are three lessons you took away from that experience?

It was my very first professional job out of college so I think that changes you in a way that you never forget. Just feeling grown up enough to have a title – even if it is just “assistant” — was a thrill to me.

#2: VOGUE was...well, VOGUE. It was elevated and a bit hallowed. I knew how important it was and did my best to take advantage of it and learn all I could. So I hope I learned to seize every moment and opportunity. (You do not have to work at a major place like VOGUE to do this, by the way! There are equally valuable things to be learned everywhere, no matter how miserable or uncool your job is.)

#3:  I learned loads about fashion and women in general from pretty much being the lowest on the totem pole. Opening your eyes [being] in a room with all of that personality, creativity, and drive was amazing. It was my job to just be quiet and soak it up. I learned that VOGUE was important as a business and as an aspirational idea for so many women

Why did you start Mashburn?  Was it a gap in the market that spurred the idea or was it more creatively inspired?

We started our business in 2007, and originally it was just a menswear brand. My husband, Sid, had been wanting to do this since almost the first day I met him in our early 20s. To him, there was a complete void in the market, and he just knew he wanted to create both a brand of clothing, and the space to sell it in.  It was a big risk at the time, and the next year the economy took a dive, so the fact that we were growing a business and hiring during that time was a big confidence booster. It was also thrilling and fun and creative to be doing it together. I started my side of the business three years later. The true reason I started mine was that the space next to Sid’s became available, and my landlord pushed me to take the space for a women’s line and shop. Our 5 daughters supported it as well; they were saying,  “Mom, you are both working so hard, and it is dad who gets all the credit!”

How do you divide the day-to-day tasks of running a business with Sid, with whom you founded this business?  Do you both equally weigh in on the creative and the business side of things?

Ha! We don’t really divide so well. In an ideal scenario, I do the women’s; he does the men’s. But we both weigh in on a great majority of decisions of all kinds: creative and strategic and operational and financial and so on. I am the Chief Creative Officer and run all of the visual and marketing portion of the business.   Our oldest daughter is a brilliant art director and writer. The look and read of all we do truly comes from her. We have a big team – web, merchandising, store ops, web, tech, warehouse - it is a lot! Somehow we figure it out.

You worked at J. Crew during an interesting time, when the company was really turning things around and growing.  How did that influence (or not influence) how you run Mashburn today?

Sid is the real J. Crew guy; I came along a few years later and worked part time as a photo stylist. It was an amazing time of growth for [J. Crew] so the photo shoots were nonstop! But Sid’s story is actually more interesting. He was the first menswear designer there in 1985.  He would reverse commute to New Jersey in a very unglamorous location when it was just a little catalog company. This young group of talented people truly created the DNA of what J. Crew would become. So absolutely our taste is similar because it is who we were and how we saw things.  We gained that shared aesthetic from sort of growing up together in our 20s, and it has shaped everything we’ve done together, from the spaces we’ve lived in to the way we raised our girls to the business we built together.

What main goals do you have for young people starting out in their careers who work at Mashburn?  How do you know if someone is going to be a fit for your company’s culture? (if there is such a thing as pre-determining it)!

Honestly, enthusiasm, curiosity and an ability to work hard – really hard - often are my most important attributes. You can be taught so much, but attitude, in my experience, is hard to teach by the time someone is of working age. We have incredible leaders here who really influence so many young people who come to work for us.  I have learned so much from them as well! 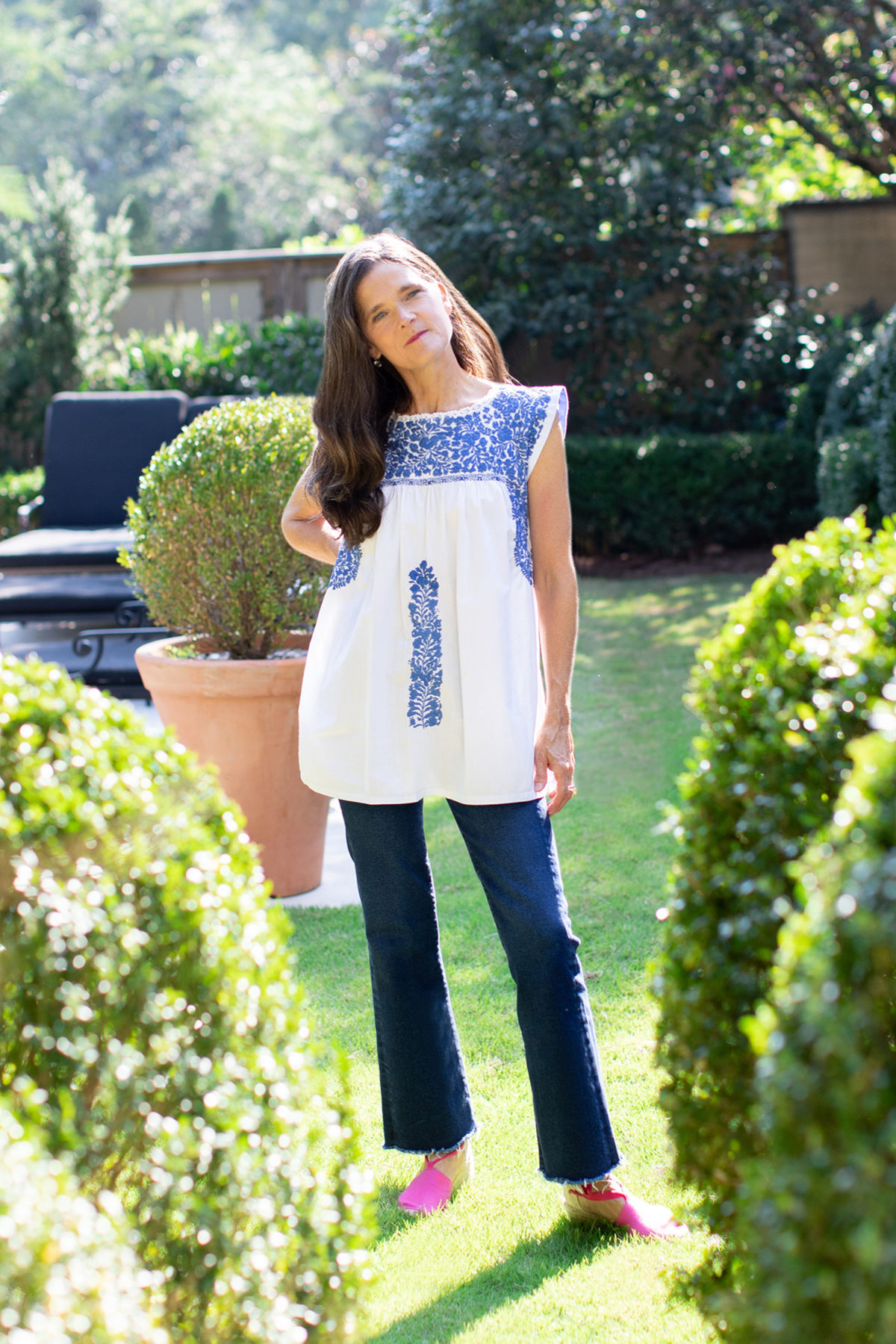 Be prepared for the risk of losing – decide how much you’re willing to lose - and then lean into it.

What has been the biggest challenge of starting a business?  If you could go back to your younger self in 2007, what advice would you give yourself?

Be prepared for the risk of losing and decide how much you’re willing to lose and then lean into it. Sid and I were comfortable with not succeeding and knew we could always go and find another job, but the window for our idea was right then or never.

Your business has grown so much in the last ten years.  What do you attribute that to?

A very clear vision of our aesthetic, great product at the right price, a beautiful atmosphere, and the best customer service and experience we can create, both online and in our shops. And, of course, we have an amazing set of customers who are incredibly loyal to us. Without them, it’s nothing!

Your personal style reminds me a bit of Emmanuelle Alt.  Classic pieces: blazers, trousers, fun (but sensible) shoes.  Who is the “Mashburn woman”? Is it a derivative of your own style?

Wow. I adore her!  What a compliment. I am by nature very impatient, and I like to move quickly, so I like fewer pieces to put on (e.g. simple jewelry) comfortable but still stylish.  I love a lot of menswear inspired looks and having grown up in the 70s and 80s, I was very influenced by Ralph Lauren so there is an “American Classic” look I love; but I am a huge Francophile so that is major. Franco-American!  But my customer, I think, can be anything. A Mashburn woman is someone who appreciates clothes and style and craftsmanship. I don’t think we make anything SO stylistic that you would say that is [insert designer.] I want a woman to feel pretty and comfortable and amazing, but it is about her and not always the clothes.

Finish the following sentence:  your ideal Friday night is spent…

Watching a movie with Thai food at home.

How have you juggled raising five (!) daughters and being an entrepreneur?  We often say balance is a myth, but are there hacks that you’ve found that have helped you do both of those jobs everyday?

When we started our business, my daughters were aged 6 to 17.  I still had a LOT going on. Balance might be a myth, but you can only properly concentrate on any one thing at a time, so, moment to moment, you just make decisions about which is the most important thing. Being an entrepreneur is actually a bit of a luxury because you have more flexibility. When the girls were younger, I took a big chunk of time off of “work” and had the very best time in my domestic universe. It is a thrill to have a frenetic business now! 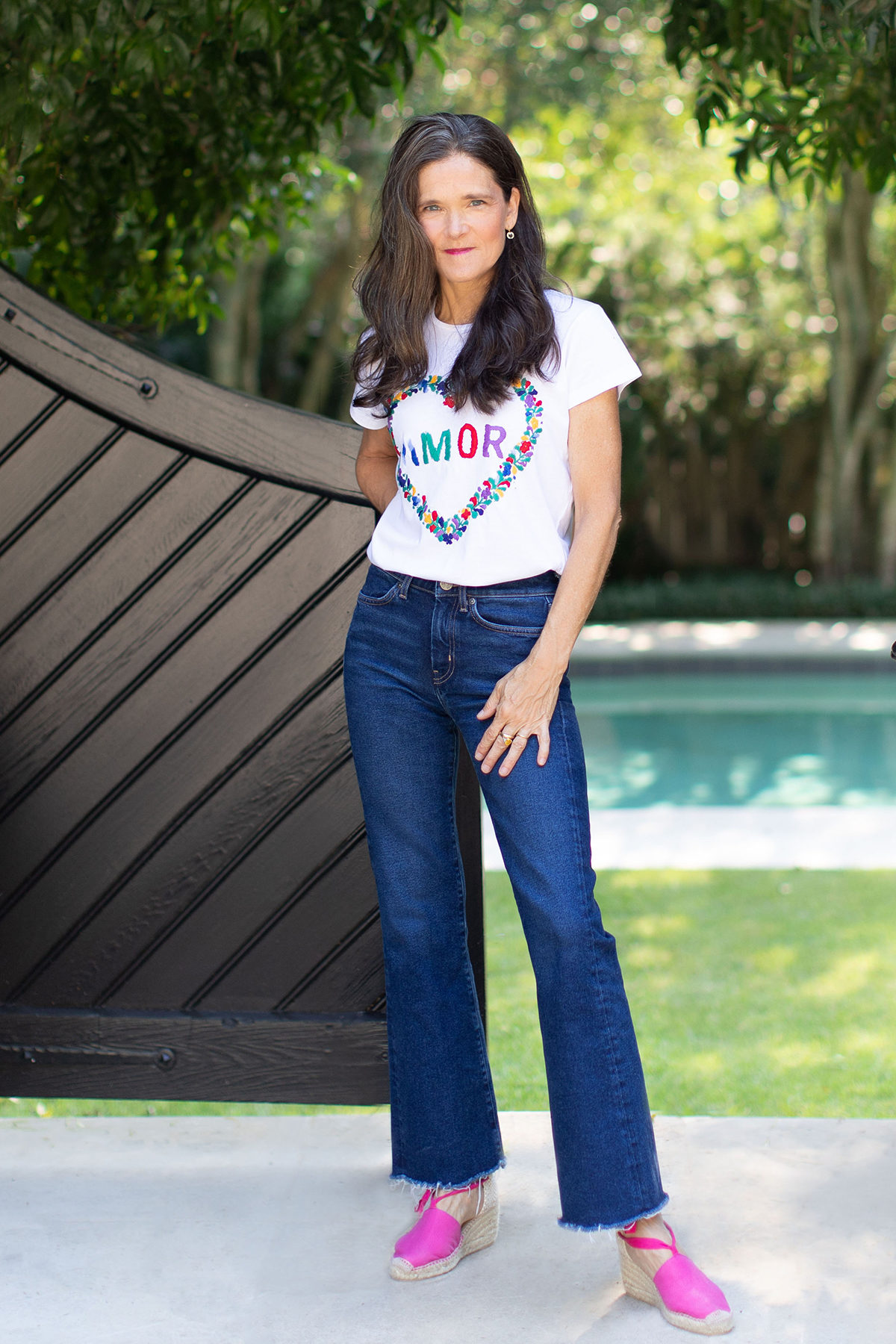 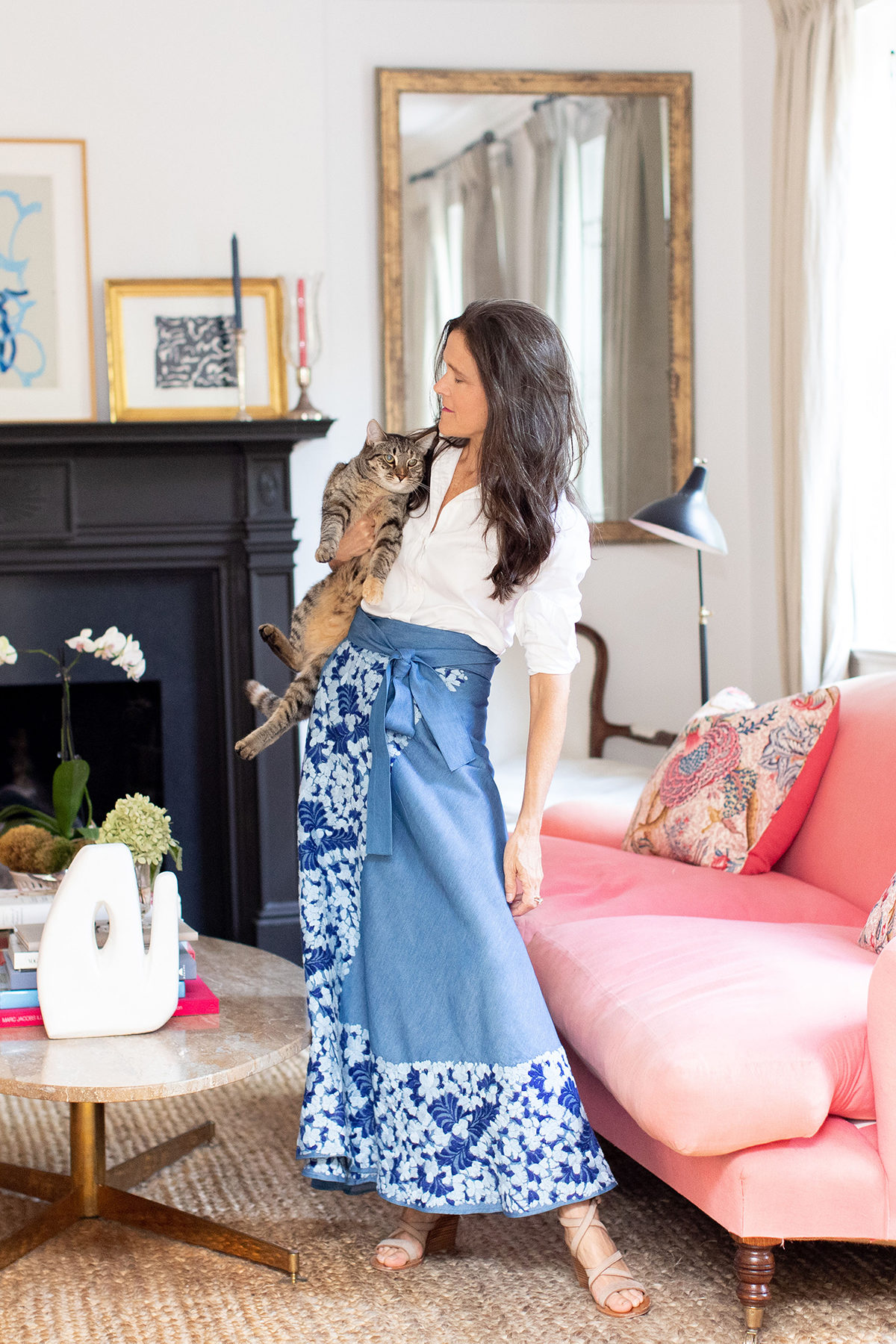 What plans do you have for your business three to five years from now?

Hopefully, we will grow into ourselves a bit more. We have built an amazing brand, and we are figuring out the best way to share it with more markets.

Do you stock your stores differently?  Are there geographic specificities for the customer in Atlanta versus the customer in, say, Dallas?  How do you serve different markets while maintaining your point of view?

Surprisingly, we stock all the stores very similarly.  People travel so much that even our hot climate stores really love the heavier fabrics as well. But we always make sure to have lighter-weight pieces that work well with your Texas heat – Houston is crazy hot!

What would your last meal on earth be?

A delicious bratwurst with mustard and sauerkraut. Echoes of my Midwestern childhood!

What item from your closet are you wearing the most these days?

I continually wear my short cowboy boots most often (nine months out of the year) and my silk tie blouses are always on constant rotation this time of year, both with jeans and dressed up.

What trend do you wish would die?

I have said this before, but the drab, mushroom colored oversized t shirts my youngest wears…. It looks like she is bottomless with her short sport shorts underneath!

I got to see the David in Florence years and years ago.  It was February and cold, and the room was empty. Just me and David. I was pretty blown away.